Manfred Krankl (one of the world’s best winemakers  and maker of the highly coveted and nearly impossible-to-get Sine Qua Non) fortunately  – for us – found time to lay down his pruning shears and pen this appreciation of the La Peira 2007 on the Bulletin Board at ErobertParker.com:

I want to put forth a terrific wine recommendation to you all. It is of wine I had never heard of before, but one I surely won’t forget any time soon.

My friend Eric Solomon was kind enough to gift me a bottle of 2007 Terrasses du Larzac “La Peira”. I believe (although I am not 100% sure) it is a cuvée of Syrah, Grenache and Mourvedre and just an absolutely delicious and complex wine in every sense.

It has exactly what I cherish in a wine and what I strive for with my own wines – a sunny disposition, full, ripe flavors, but nothing at all over the top here, nothing two-square or clumsy, but rather just a delightful potpourri of dark berry fruit and maybe some dried flowers….if memory serves correctly. Beautifully nuanced and layered, thought provoking and detailed, but rich and mouth-coating at the same time. What a wine.

I have no idea what it costs, but just about whatever it is –buy it!

One of best new wine discoveries for me this year so far.

The thread can be found here: Mark Squires’ Bulletin Board on ErobertParker.com

Obviously we were very pleased to read this…that Mr Solomon shared our La Peira 2007, and that Mr Krankl took some time out to write about it.

Like some incorrigible repeat offender  our first wine has a little form here, Gary Vaynerchuk  having given the La Peira 2005 a near perfect score and suggesting, “The flagship wine from this new venture is easily going to be the next great global cult wine. Think Clos Erasmus or Masseto…”

PJ Wine , who  stock the La Peira 2006 (along with B21,Wally’s Wine & Spirits UPDATE Wine Library & Sokolin) also posted this nice review which we were happy to read and which, in some ways, encapsulates some of the qualities we’d hope the wines possess:

“Simply stunning. Wild flowers, dark chocolate, and allspice on the nose, followed by deep, rich fruit lifted by chalk and yet even more floral characteristics. Despite this opulence, and to be sure this wine is opulent, it maintains as silky and refined as a noble gentleman. Almost like a grand wine of Bordeaux, but with more drama.”

The 2007s should we finding their way to Berry Bros. and Rudd  in the UK (UPDATE: they’ve arrived) and various other destinations in Europe shortly if not already, and also Taiwan, and Korea.

The Mas Jullien 2007 we tasted recently was frighteningly good and should be sought-out at all costs.

Our 2008s have been blent, and should be bottled in June. The initial thought is that, in terms of finesse, fine tannins, and freshness, the 08s may even represent an advancement on the 07s while retaining the concentration from that vintage. But we’ll see.

Oh, and it snowed at lot this winter, as the image below, and those who visit our little page of photographs on flickr can attest! 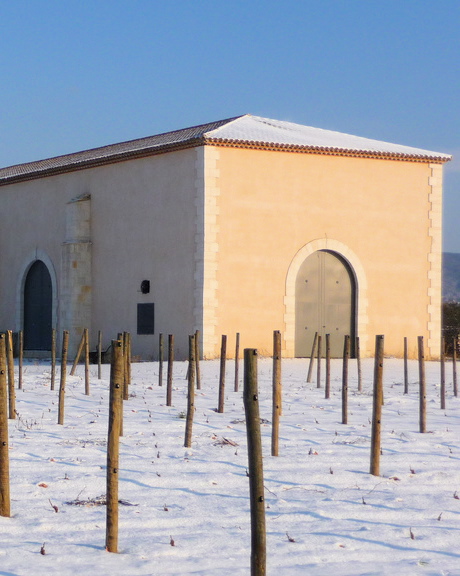